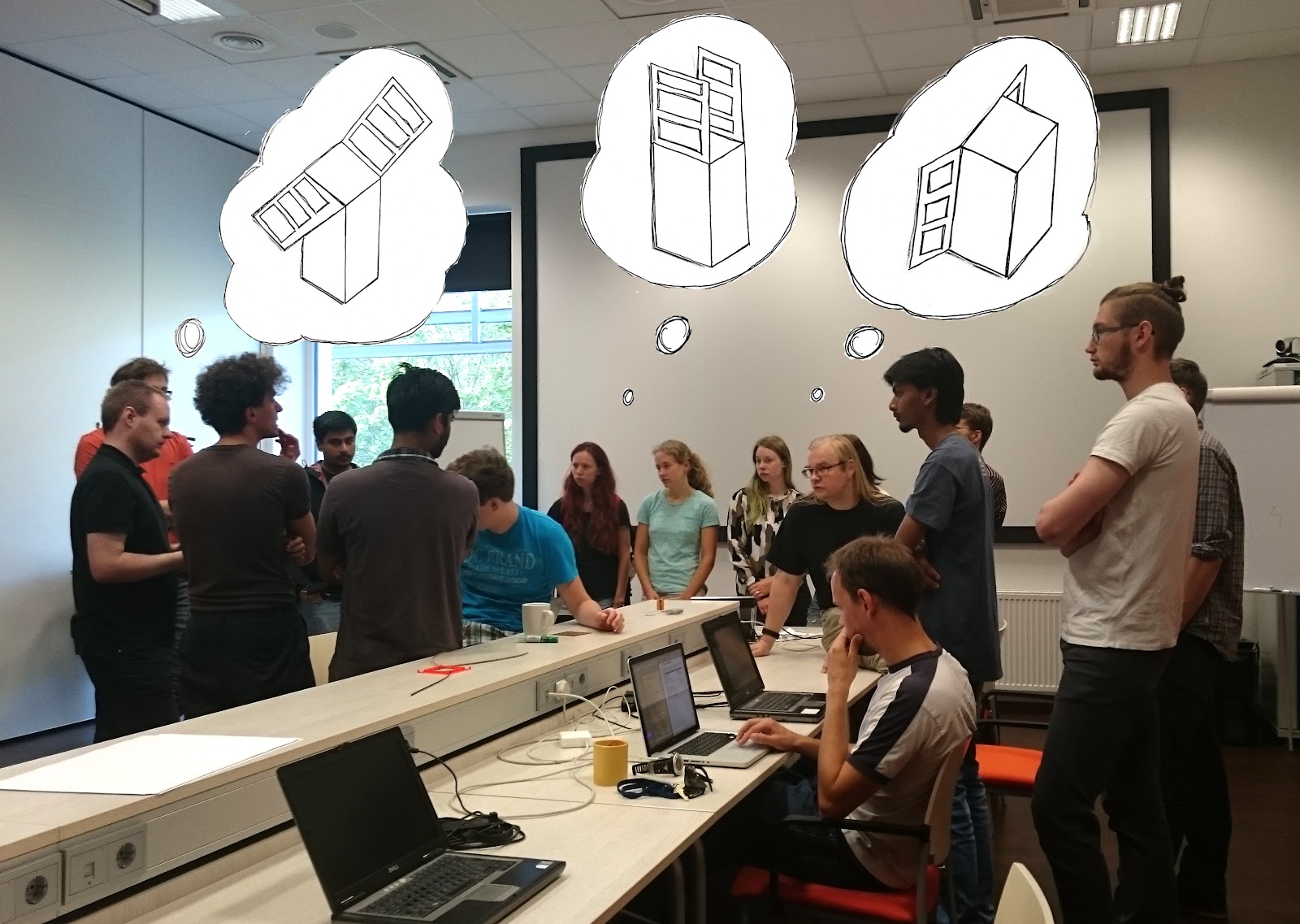 Members of Teaduslaager taking part in the discussion about ESTCube-2 deployable sidepanels.

On 18-21 of July, members of Science Camp (Teaduslaager) assisted the main team and the Science Task Force (Teadusmalev) with their mission of sending ESTCube-2 into space.

Teaduslaager is a part of Tartu Observatory Summer Academy that consists of traineeships for high school and university students, alongside with a Science Task Force and a Science Camp. As the competition for partaking in the Science Task Force is getting tougher by the year, the Science Camp gives an opportunity for bright young minds to get familiar with the Observatory’s daily work in a week-long camp. It was concluded by science campers’ participation in the traditional barge cruise for researchers and trainees.

During Teaduslaager, young participants had the chance to get familiar with ESTCube-2 subsystem teams and their tasks. Campers could observe work in different fields and find out the toughest questions and tasks in all of them. The team members valued their input - a fresh pair of eyes can bring upon questions that don’t pop into the heads of old hands, providing a new perspective and ideas.

This year, five students participated in the camp. Three of them - Annabel, Aksel and Kerli - are studying at Hugo Treffner Gymnasium; Renita recently graduated Türi Basic School and is continuing her studies and Nõo Science Gymnasium. Viktorija joined us from behind our southern border, from Tukums 2. Secondary School in Latvia.

On a sunny Tuesday I encountered Annabel and Renita in the Observatory cafeteria. They can be described as veterans of the science camp, as they are spending a week of their summer in Observatory for the second time already. On the first day of the camp they got to know the Observatory and its workers, alongside with ESTCube-1’s construction, tasks and activities. Furthermore, the girls got to meet with about half of the participants of the Science Task Force.

Annabel and Renita, being only 17 and 16 years of age, stand out with their academic success and good results at science and humanities’ olympiads. But the warmest place in their hearts is reserved for (astro)physics! Their ambitious dreams include the career of an astronaut or an astrophysicist at NASA or joining the Mars One mission.

What brought the girls to Science Camp for the second year already? Most of all they appreciate the relaxed atmosphere of the observatory that keeps stress at bay and favors creating exciting academic contacts. School and university students along with researchers are working together toward a common goal, crossing even the borders of countries and continents. It’s glad to hear that those friendships last - be it up against returning to homeland or seeking out new horizons.Furthermore, the girls are gathering ideas for practical research works in school to connect them with the ESTCube missions or other research at the observatory. And of course, the buzzing social life at Tõravere after working hours is the icing on the cake. One thing is for certain - Tõravere keeps you coming back!

Science Town is a part of Tartu Hanseatic Days with the aim to introduce the achievements of Tartu University and the work of Estonian scientists both past and present to the public (read more: www.hansapaevad.ee).
The tent of ESTCube and Teadusmalev was especially attractive to children who built their own cubesats, rockets, and egg parachutes.
The Tartu Observatory Summer Academy is continuing and we carry on work on ESTCube-2 (read more: to.ee/eng/news) with the boost of motivation from the enthusiastic next generation of space technology experts we met at the Tartu Hanseatic Days.

On July 4, 2016 at Tartu Observatory already for the fifth time starts Science Task Force “Teadusmalev” that is organized in cooperation with University of Tartu, Tartu Hansa and Tartu Toome Rotary Clubs.
The aim of the “Teadusmalev” is to offer hands-on experience to school-age science enthusiasts by being acquainted with the profession of a scientist. Oppose to last summer, when all participants worked together as a research group and developed a Helmoltz cage to test magnetic properties of small satellites, this summer each participant will have individual task related to one of ESTCube-2 subsystems or research done at the observatory.
Tasks will be related for example to ESTCube-2 Attitude and Orbital Control Subsystem (AOCS) that is responsible for control of the attitude and position of a satellite, and Communication Subsystem that enables communication between satellite in orbit and ground station. The lead of AOCS Hendrik Ehrpais reviles that task of his new team members will be to develop magnetorques and test attitude determination sensors.
One astronomy enthusiast will get to analyse the brightness fluctuation of massive stars of comparably poorly researched star cluster NGC 7419 based on data collected from Tõravere. Additionally participants will get the chance to learn different observation methods using the observatory’s telescopes and take part in remote sensing field works.
This year the Youth Development Fund of the Tartu Hansa Rotary and the Tartu Toome Rotary Clubs has granted five fellowships to secondary school students for the participation in “Teadusmalev”. The Youth Development Fund of the clubs awards with the fellowship following candidates: Frida Laigu (Gustav Adolfi Grammar School), Daniil Lepkin (Tallinn Õismäe Russian Lyceum), Hanna Britt Soots (Tallinn Secondary School of Science), Knuth Helekivi (Tartu Mart Reiniku School), and Mathias Plans (Jaan Poska Gymnasium).
Considering the great motivation of other candidates the Tartu Observatory and Estonian Student Satellite Foundation decided to support also secondary school students Hartvig Tooming (Tallinn French Lyceum), Laima Anna Dalbiņa (Valmiera State Gymnasium, Latvia), and Vlad Karzubov (Tartu Annelinn Gymnasium). For one week, July 18-22 for a Science Camp everyone will join Annabel Talts (Hugo Treffner Gymnasium), Aksel Allas (Hugo Treffner Gymnasium), Kerli Tali (Hugo Treffner Gymnasium), Viktorija Leimane (Tukums 2. Secondary School, Latvia), and Renita Ämarik (Türi Basic School).
The Director of the Tartu Observatory Anu Reinart says that researchers at the observatory are positive towards their young summer colleagues: “We see that curios school children develop into smart and motivated successful young researchers. This year’s winner of the Estonian youth research competition Eva Maria Tõnson has participated in the Science Summer Camp and the “Teadusmalev” and will present her research in remote sensing field at the world’s largest international pre-college science competition Intel ISEF.“
The great challenge of the „Teadusmalev“2016 is participation in rapid development of the satellite ESTCube-2 since it shall be launched already on the 100-year anniversary of the Republic of Estonia.